Home » Resource » How Does A Motorcycle Transmission Works? 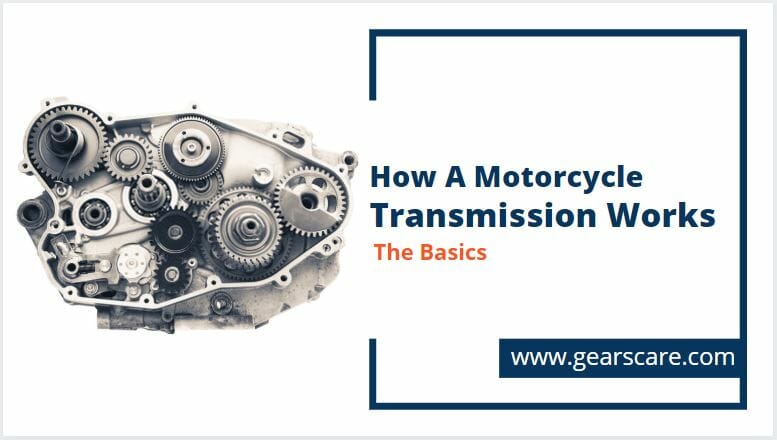 Riding motorcycles is not too difficult for a rider. The bike itself does more work than the rider. Have you ever thought about this?

We usually provide fuel to the engine. But how does it transfer energy, how does it move the motorcycle? Different parts of motorcycles play important roles here.

Transmission’s working pattern is also straightforward. In this article, you will find the details.

How Does A Motorcycle Transmission Work?

The transmission is part of the energy transport chain. So it can’t perform any work as an individual. So it won’t be very reasonable to think it’s different activities.

For a Proper understanding of its activities, you consider some other things. These are:

What is motorcycle Transmission?

To know the working process, firstly you should know about it. Let’s learn about motorcycle transmission.

Transmission is one of the essential parts of the motorcycle. It is located between the clutch and gear set. In some cases, the clutch is also considered as part of a transmission.

Its primary function is to transfer energy from engine to gear set. Finally, the power will reach the back wheel. And the back wheel will be able to move.

So it can be called a transport of energy. So it is also an essential part of a motorcycle. Without its proper action, the movement of motorcycles is almost impossible.

The Working Mechanism Of Motorcycle Transmission

According to the selection of gear, it performs work. The transmission consists of three major parts. These are the clutch, backpacks, and driveshaft.

The mechanism of their actions is given below:

Transmission Associated Structures Of The Motorcycle And Their Respective Actions

Energy is generally produced in the engine crankshaft. This energy transfers to the engine. The chain or performs the work.

It transmits energy to the engine.

It is the accumulation of some structures. The main parts of the clutch are the spring, lever, and plates. These act combinedly when it is required.

When the lever is pulled in, the energy supply starts. Then the pressure plate creates pressure on the spring. The springs then compress the vessels and transmit the energy.

When the lever shifts, the pressure plate is relieved. The steel plates and friction plates move independently.

The connection is unable to continue. So the engine disconnects. Thus the clutch performs its activities.

Read also: How does a motorcycle clutch work

The lever is a part of the clutch. It attaches to the engine. It also establishes a connection between motor and clutch.

The lever helps to change the gears.

The shift drum is a part of the gear. It mainly acts as a converter. It converts the direction of movements of the equipment.

So it changes into horizontal from the up-down movement.

Shift fork is also a part of the gear. It controls the gear’s horizontal movement.

Input shaft located before the gears. It supplies energy to the equipment. The energy supply also happens selectively.

The gear is also a part of the transmission. The number of equipment may vary depending on the motorcycle. In a small motorcycle-only two kits are used.

Usually, people use 4 or 6 gears on their motorcycle. Equipment can easily change the energy supply from top to bottom. From the input shaft, energy enters into the loads. Then the power multiplies here. Finally, through the final stake, strength comes out.

Through this, the energy comes out from the gear. It supplies power to the countershaft.

People also call it the final drive. It supplies energy to the back wheel. Driveshaft performs its work through a chain or belt, or shaft.

In most cases, people use the chain.

The primary mechanism of motorcycle transmission is similar everywhere. But there may be a little difference in their functions.

It is partially dependent on the types of transmission. Either it is manual or automatic. So it is also an important issue.

Different types of motorcycle transmission are:

The automatic transmission is easier to use. There is no requirement for manual activity. So it is quite popular in the market.

It is mostly used in scooters and sportbikes. As it works automatically, it is straightforward to use. So it is safe to ride.

It’s preferable for the kids, ladies and aged people. Other types of people can also use this. The gear maintains a range in the automatic transmission system.

The semi-Automatic transmission does not require a manual clutch operation. Sometimes it may have a double-clutch for better function.

Double-clutch is helpful for smooth riding. All of its activities are manual except having the automatic clutch.

Most of motorcycle has a manual transmission system. Here the clutch system is also manual. In this system first and second gear is neutral to control.

After that, it requires manual efforts. You can’t increase gear according to your wish. After the second gear, it needs to increase serially.

For example, you can raise gear from two to three. But it is impossible to move two to four, skipping three. People prefer this type of transmission.

Do I genuinely need to change gears physically on a cruiser?

Indeed. Bikes have successive manual transmissions, so you’ll need to figure out how to utilize a grip and change gears if you will ride one. If you realize how to drive a vehicle with a stick move, you comprehend the ideas essential to change gears on a cruiser; the distinction will be the area of the controls. Likewise, a cruiser transmission is consecutive, which means you can’t hop straightforwardly from first to fifth stuff – you should move through second, third, and fourth cogwheels to get to fifth. The equivalent applies for downshifting, in the opposite request.

Is there such a mind-bending concept as a programmed transmission cruiser?

Indeed, however, they are uncommon. Ridley Motorcycle Company, begun in 1995, makes a full line of programmed transmission bikes. Aprilia’s Manna 850 has a programmed transmission. So does Honda’s DN-01. There might be different models out there I’m failing to remember. However, the following nearest things are the vast dislodging bikes, for example, Suzuki’s Bergman and Honda’s Silver Wing.

Do cruisers have the opposite stuff?

Just the heaviest of professional bicycles have converse stuff, for example, the Honda Gold Wing. This is one reason why it’s critical to have the option to put your feet level on the ground when sitting on a cruiser; you should back it up utilizing your feet on the off chance that you need to abstain from getting off and pushing it in reverse.

What is the recurrence of the progress of oil for the stuffing box of my cruiser?

If it’s not too much trouble, allude to the proposals given in the proprietor’s manual as the Oil Drain Interval changes from model to demonstrate. On a normal, the oil ought to be changed every 4000 km.

A bike transmission is a transmission made explicitly for bike applications. They may likewise be found being used on other light vehicles, for example, engine tricycles and quad bikes, go-karts, rough terrain carriages, auto carts, trimmers, and other utility vehicles, microcars, and even some superlight dashing vehicles. This article is about how does a motorcycle transmission works.I hope you understand how does the information about a motorcycle works.